My research aims to establish causal relations between development, heredity and evolution. I study the origin and spread of variation within populations, why phenotypes are maintained or lost, and the consequences such processes have for dynamics of populations on short and long time scales. Our study systems include lizards, frogs, birds and, more recently, water fleas. We use a range of tools such as laboratory and field experiments, different physiological and molecular methods, and comparative and meta-analytical approaches. My research often makes use of mathematical modelling to predict or interpret evolutionary outcomes.

Examples of recent research projects include the adaptive significance of maternal effects on offspring phenotype, evolutionary transitions in sex determining systems, causes and consequences of hybridization, and evolution of long-term effects of early life conditions. A developmental perspective on phenotypic evolution also raises several important conceptual issues, which I explore with colleagues in contributions aimed towards biologists and philosophers of science. 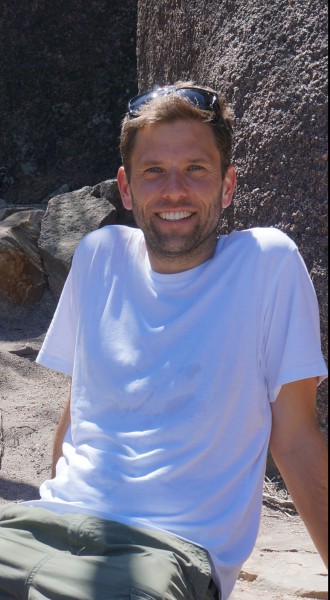 I am broadly interested in evolutionary ecology, particularly in how the environment and developmental processes affect evolution. In my current research, I take a meta-analytical approach to investigate the relative importance of developmental bias in evolution. I also work on maternal effects in water fleas (Daphnia spp.): we investigate the mechanism and evolutionary significance of non-genetic inheritance of tolerance to toxins produced by cyanobacteria. Before, I worked in Oxford on social behaviour and genetics in great tits. I have looked at the heritability of social network traits and took also a population genetic approach to investigate how space and social structure affect the distribution of genotypes in the population. I did my PhD in Groningen on the ecological and evolutionary consequences of brood sex ratio variation, also in great tits. 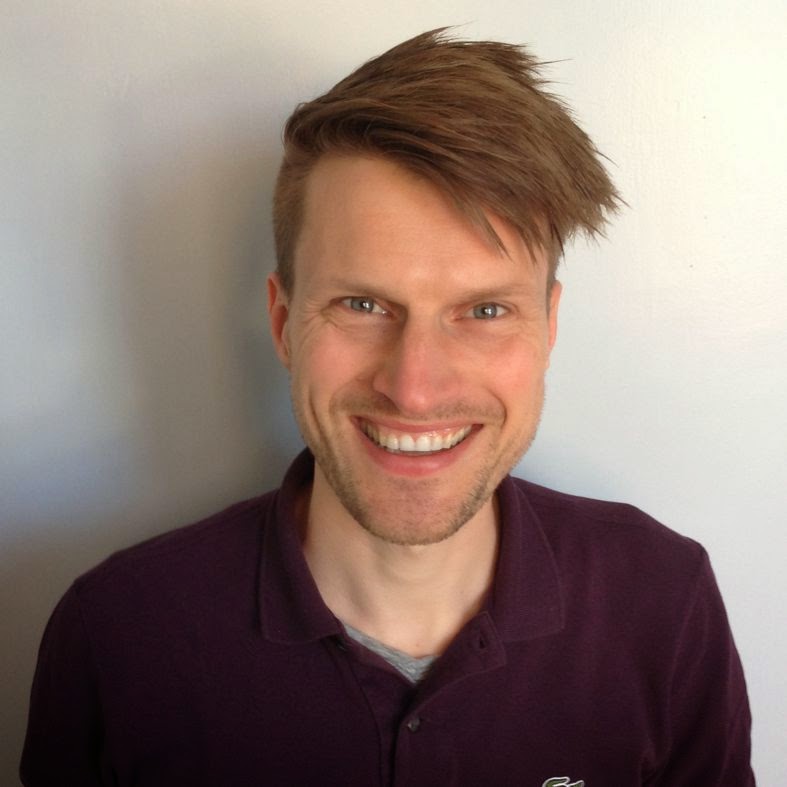 My main interest is to understand how animals diversify. I continue work initiated while a Humboldt Fellow at the University of Oxford, where I studied limb development in Anolis lizards. Specifically, and I am aiming to figure out what developmental genetic differences cause some lizard species to have short, stubby legs (the ‘climbers’), and some to have long legs (the ‘runners’) and how those differences arose during adaptive radiation. I am also studying how developmental plasticity can contribute to evolutionary diversification. Is it possible that developmental plasticity in the Anolis ancestors facilitated their adaptive radiation on the Caribbean islands? 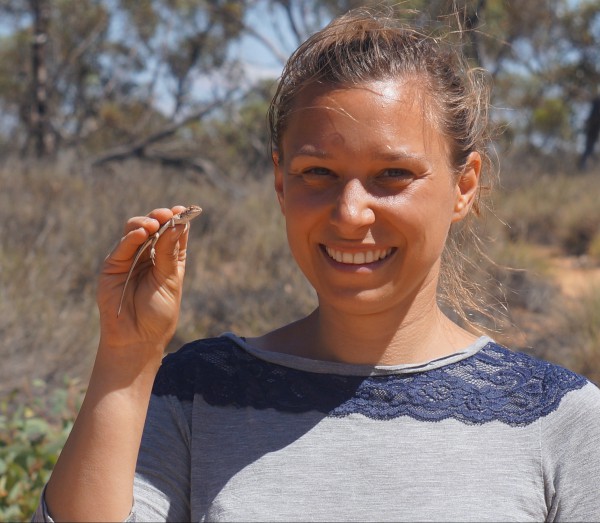 My general research interests are mainly focused on the mechanisms of evolution. I am particularly interested in the genetic basis of evolutionary novelties. The principles of molecular evolution and population genetics, along with the advances in high throughput sequencing technology and bioinformatics, give us the opportunity to study the overall perspective of adaptation on -omics levels. As a postdoc researcher at Lund University, I am working on the project investigating the genomic signature of sexually selected hybridization in wall lizards (Podarcis muralis). We aim to generate a comprehensive understanding of how sexual and natural selection upon secondary contact shapes genome-wide patterns of introgression and geographic variation in phenotypic diversity in the wild. 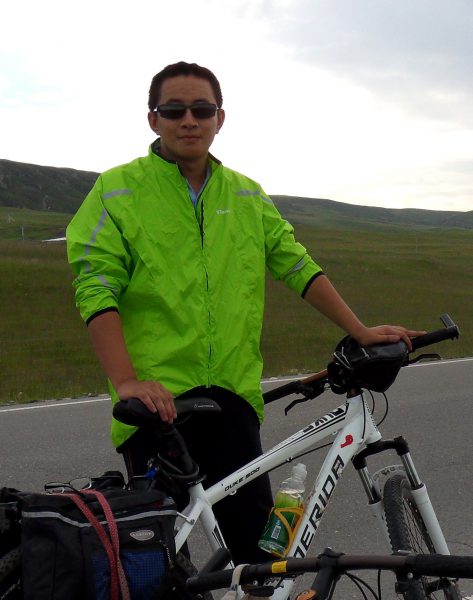 My aim is to understand how regulatory networks evolve to integrate genetic, developmental and environmental factors. I focus on how phenotypic evolution can be caused by changes in the interactions between groups of heterogeneous components rather than by individual genes. My methods include integrative analyses of heterogeneous high-throughput datasets based on theoretical evolutionary modelling.
I am using simulations of environmental and genetic networks to explain the evolution of phenotypic plasticity. I aim to provide a theoretical backbone for empirical studies on how environmental interactions affect the structure of developmental regulation and to understand which regulatory architectures evolve to dampen, propagate or interpret environmental inputs. 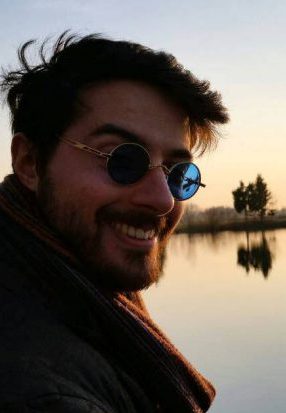 I am interested in how the environment influences the traits of organisms. As a PhD student at Lund University, under the supervision of Tobias Uller, I will work with water fleas (Daphnia) to study phenotypic plasticity and non-genetic inheritance. Due to their unique biology, Daphnia is a great model system for studying such questions. Not only do they produce clones, making it possible to raise large cohorts of genetically identical individuals, but they also have a short generation time and are small and easy to keep the lab. In addition, Daphnia can also reproduce sexually and create resting eggs that can stay dormant in lake sediments for decades. This opens up the possibility of resurrection studies to investigate evolutionary questions concerning the relationship between plasticity and adaptation. 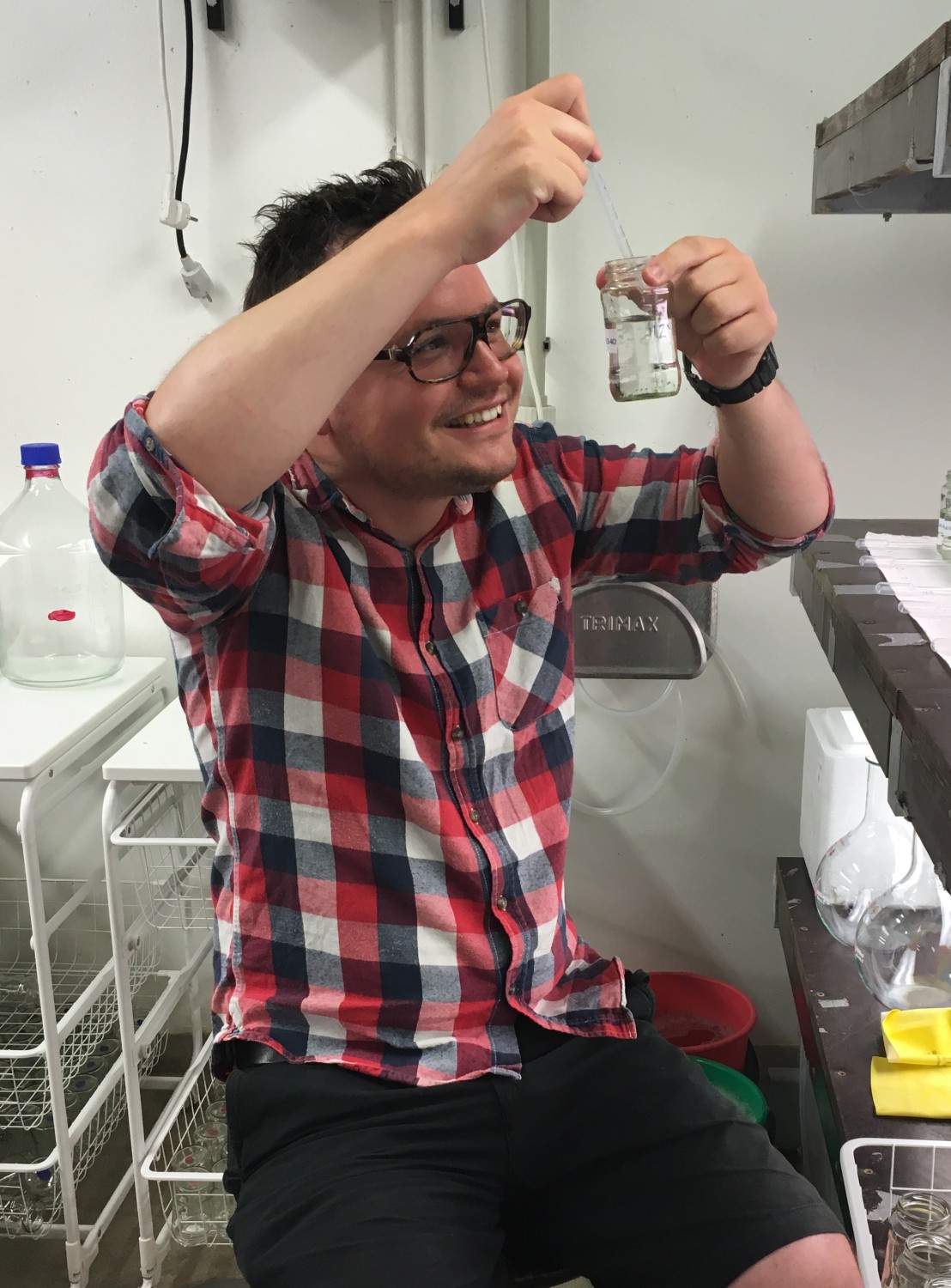 I am a PhD student at University of Tasmania, under the supervision of Tobias Uller and Geoff While. I am interested in the mechanisms that generate adaptation, in particular how differences in environment influence evolutionary convergence and divergence. During my PhD I will study the processes that drive geographic patterns of introgression in wall lizards, and the consequences this introgression has for the evolution of sexual dimorphism. To this end I will combine field studies, laboratory experiments and genomic analyses across multiple regions of secondary contact. 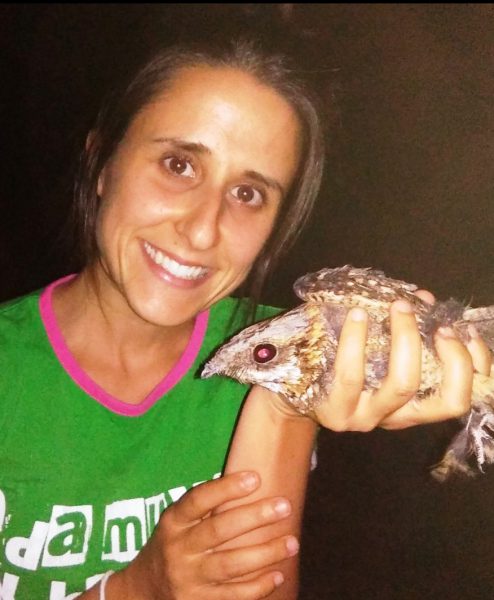 I am a lab manager of the group and my tasks vary from general administration to assistance in all the research related things, and also to research itself. In my PhD I studied genetic diversity and phylogeography of boreal and arctic marine fauna. I investigated genetic relationships (vicariance, dispersal, cryptic diversity, secondary contacts and introgression) of North Pacific and Atlantic animals in the timescale from Pliocene to Holocene. While my background is in phylogeography, I am particularly fascinated by adaptation to new environments, including the ecological drivers and evolutionary mechanisms behind it. 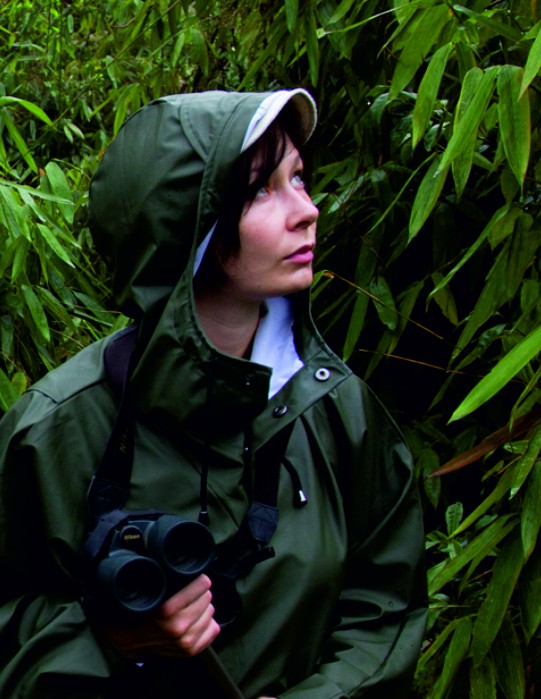 I completed my Bachelor’s at the University of Athens where I did my thesis on prey-predator behavior working with lizards and snakes. Currently, I am a Master’s student highly interested by the way that evolution shapes nature.

For my Master’s thesis I will study ventral color polymorphism in the common wall lizard, Podarcis muralis. The main aim of my study is to see if there is any correlation between the frequency of color morphs and environmental factors and to test for behavioural differences between morphs of male lizards. 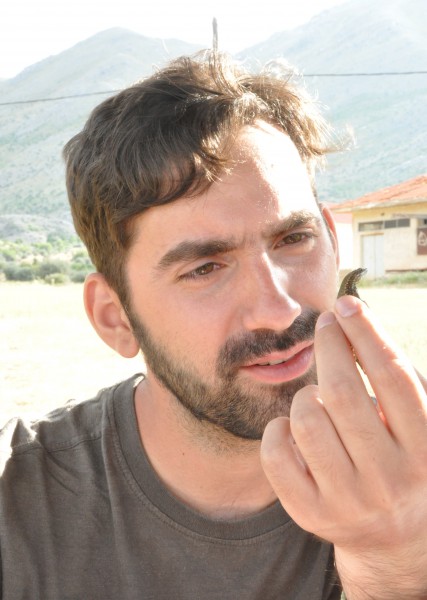 I am interested in understanding the connections between genes, behaviour and environment. During my undergraduate project I monitored population dynamics of mammals in wild and semi-captive settings to understand the relation between ethology and ecology. During the first year of my MSc in Paris I studied the chemical mechanisms of nest mate recognition in ants. Now at Lund I am working on sexual selection in wall lizards. I want to understand better how divergence in sexually selected characters affect gene flow and reproductive isolation of lineages in secondary contact. 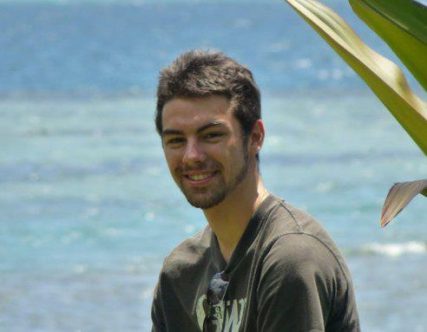 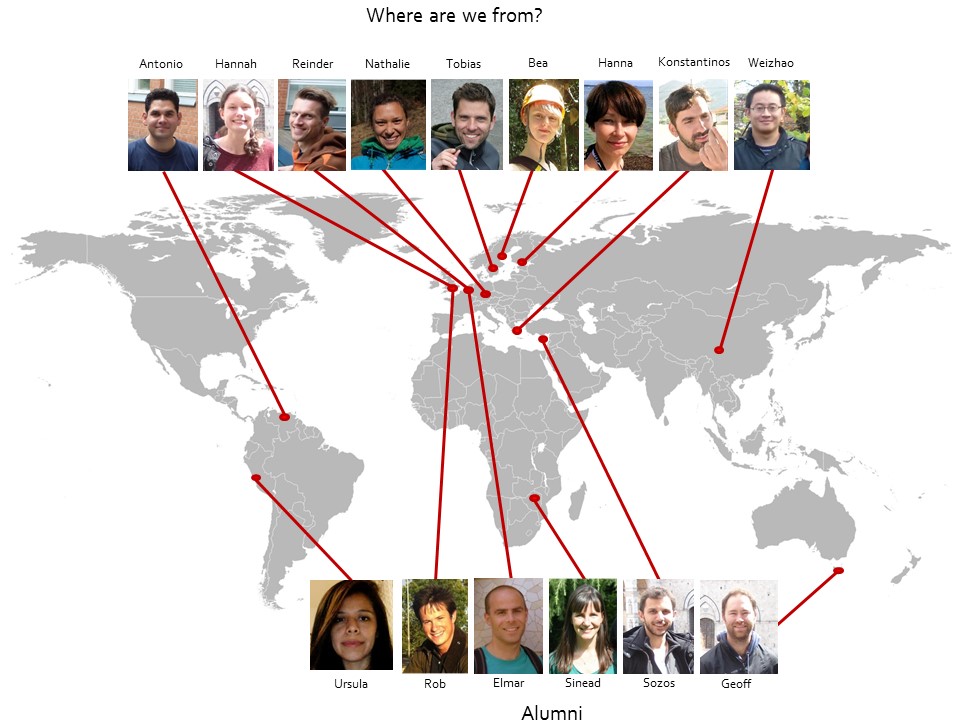