Egernia are a group of family-living lizards that occur throughout Australasia. The group comprises approximately 60 species from seven different genera. They contain a number of iconic Australian lizards like the bluetongue lizard (Tiliqua scincoides), the sleepy lizard (Tiliqua rugosa) and the wonderfully named ‘land mullet’ (Egernia major). Most of our work is done on the (somewhat less iconic) White’s skink (Liopholis whitii).

One of the most striking features of Egernia is that they include highly social lizards that form stable social aggregations based around kin. While some species are largely solitary, in others males and females form longterm pair-bonds sometimes holding territories where juveniles can remain with their parents. In the most extreme cases this can lead to large communal groups of up to 30 related individuals, including non-breeding adults who stay within their parent’s social group.

Our research attempts to understand the origin and evolution of this social complexity. We do this by combining long-term field studies of natural populations with experimental work, often involving semi-natural enclosures where we study how social bonds are formed, maintained, and why they sometimes are dissolved. This will help us to understand the early steps in vertebrate sociality, including the formation of benign parent-offspring relations after birth, something that is not very common in lizards. For more on Egernia biology, see our Quick Guide in Current Biology.

The Egernia research is headed by Geoff While at the University of Tasmania and involves additional collaborators in Australia and Charlie Cornwallis in Lund. 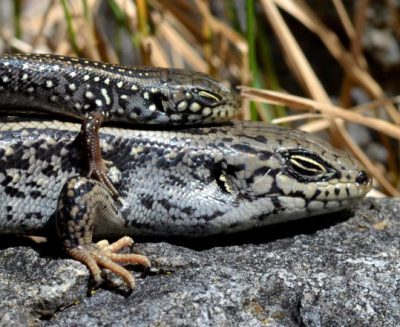 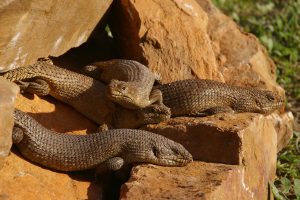