“Our research lies at the interface of development, ecology, and evolution. We use experimental and comparative methods, guided by mathematical modelling and conceptual analysis”

Evolutionary change occurs through changes in the processes that generate phenotypes – development writ large. We study the developmental basis of adaptive evolution, and the relationship between development and evolvability.

Despite that a vast number of alternative solutions could be equally fit, particular trait combinations tend to evolve again and again. Such instances of parallel or convergent evolution lend themselves particularly well to establish how developmental processes bias evolutionary outcomes.

Our most recent project, funded by an ERC Starting Grant, investigates the developmental basis of parallel evolution in Mediterranean wall lizards. Several Podarcis species have evolved a striking combination of exaggerated morphologies, coloration and behaviours. We unravel the evolution of this syndrome by combining developmental cell biology and genomics to ecological and behavioural assays.

Theoretical modelling is an important tool to further our understanding of how properties of developmental systems affect evolutionary dynamics. In the simplest case, development can be represented by a gene-regulatory network, but models can also involve cell-cell interactions in two or three dimensions. Such models can be used to make predictions about how development influences evolution, and to study how evolution by natural selection can make organisms better at evolving.

Organisms must respond to their environment to develop and maintain biological functions. We study how this environmental responsiveness evolves, and how it affects the capacity for organisms to undergo future evolution.

Phenotypic plasticity is everywhere. But when will it be the best solution, what should the responses be like, and how long should individuals stay open to environmental influence? Plasticity can also affect the capacity of populations to evolve since it influences the phenotypic variation exposed to selection. To understand the evolutionary implications of plasticity it is often useful to think of phenotypes in terms of regulatory developmental systems. This allows us to study how environmental control evolves, and how this in turn influences how accessible new phenotypic variants are through genetic change.

One prediction is that plastic responses can direct adaptive evolution along particular trajectories. This, in turn, may influence what adaptive solutions will look like, and therefore evolutionary convergence and divergence. We test these predictions using a range of methods, from comparative analyses to experimental studies of lizards and other organisms.

Causes and Consequences of Hybridization – from Behaviour to Evolution

Individuals from different genetic lineages occasionally mate and exchange genes. We study if such hybridization is a source of genetic variation that can fuel adaptation and give rise to evolutionary novelties.

We have extensively studied ongoing hybridization between two deeply divergent lineages of the European wall lizard – from the behavioural interactions in hybrid populations to genomic signatures of introgression – and are now expanding our scope to other species of the Podarcis genus. Our first results of this work have shown that introgressive hybridization has been rampant throughout the history of Mediterranean wall lizards. Some of these hybrid lineages have subsequently produced an extraordinary phenotypic diversity, in particular in colour patterning. Many of these colour patterns function in male-male competition, and therefore evolve under sexual selection.

Using a combination of genomic and phenotypic data, we investigate if and how ancient hybridization events contributed to phenotypic novelty and diversification. Other projects combine experimental and field studies of behaviour, morphology and colouration to establish how divergence in sexual ornamentation shapes patterns of gene flow and adaptive introgression between lineages.

When Barbara McClintock discovered genetic elements that can move or copy themselves from one location in the genome to another, this came as a big surprise. Today, we know that these transposable elements (TEs) are a feature of all organisms that shape how genomes evolve. Lizards are no exception to this, and a variety of different kinds of TEs have been identified in lizard genomes. TEs that proliferate can modify gene expression and thus contribute to phenotypic variation. TE active is a problem for genome integrity, however, and TEs are therefore often silenced by the host genome, resulting in interesting evolutionary dynamics, not unlike arms races between parasites and hosts.

We adopt a macroevolutionary perspective to test if the activity of TEs is reflected in patterns of diversification. We found for example that the amount of TEs is positively correlated with patterns of speciation in Anolis lizards. While this is an exciting finding, it is just a first step towards understanding how genomic features can affect patterns of evolutionary diversifications – and vice versa. 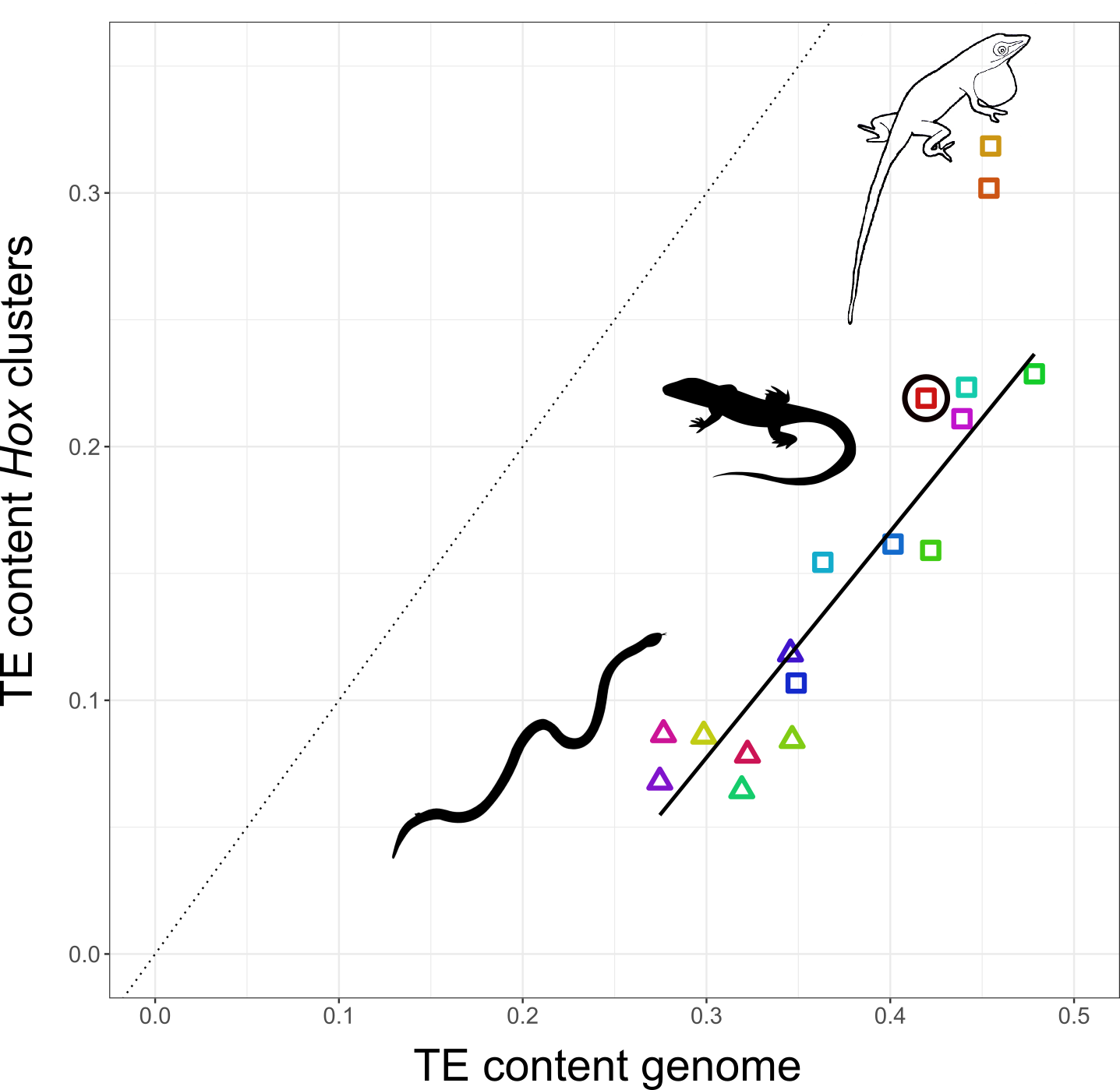 Another interest lies in functional genomic aspects of TEs – how is gene regulation maintained when TEs are going wild? Anolis lizards in particular seem to tolerate TE invasions even into genomic regions that are crucial for normal development. Hox gene clusters are usually kept ‘clean’ from TEs, but Anolis Hox clusters are exceptional in that they harbour a large number of TEs. We are now investigating how Anolis lizards maintain gene regulation of their disrupted Hox clusters. We do so by looking at how epigenetic marks change during development and how this differs between TE-rich and TE-poor Hox clusters of selected Anolis species.

Feiner N. 2016. Accumulation of transposable elements in Hox gene clusters during adaptive radiation of Anolis lizards. Proceedings of the Royal Society of London B 283

Parents pass on a wide range of developmental resources to their offspring through the egg, the placenta and via postnatal provisioning. Behavioral interactions are also important, with social learning being common in both invertebrates and vertebrates. While the transfer of DNA is known as genetic inheritance, other mechanisms that influence parent-offspring resemblance are collectively known as extra-genetic inheritance.

Much of our research has focused on how extra-genetic inheritance evolves, in particular when it provides a flexible means to pass on information between generations. For example, we have shown that incomplete epigenetic resetting between generations can be favored by natural selection if environments show a modest degree of variability and uncertainty. These and other model predictions can be tested empirically, which we do using field and laboratory experiments on water fleas and in studies of the evolution of parental care in lizards.

Extra-genetic inheritance also serves as a source of phenotypic variation that – similarly to within-generation plasticity – can influence if and how populations adapt. Stress-induced parental effects may, over evolutionary time, be converted into phenotypes that are reliably inherited between generations. We are interested in trying to reveal signatures of this process in populations that have recently adapted to new environments, and our research involves both water fleas and lizards.

Helanterä, H. & Uller, T. 2020. Different perspectives on non-genetic inheritance in evolutionary biology illustrate the versatile utility of the Price Equation. Philosophical Transactions of the Royal Society of London B 375: 20190366

The 20th century became known as the century of the gene. The overwhelming focus on genes makes it easy to forget that what is outside of the genome is not only permissive for development, but also instructive. Organisms are inherently flexible and respond to environmental challenges by changing their shape, size, or behaviour. Sometimes such responses can even affect the next generation. The evolutionary implications of developmental plasticity and extra-genetic inheritance are poorly understood and highly contested. The fundamental source of contention is if plasticity and extra-genetic inheritance are best viewed as adaptive features under genetic control, or if there is value in considering the processes of development and heredity to play a more active role in the origin, spread, and maintenance of adaptations. 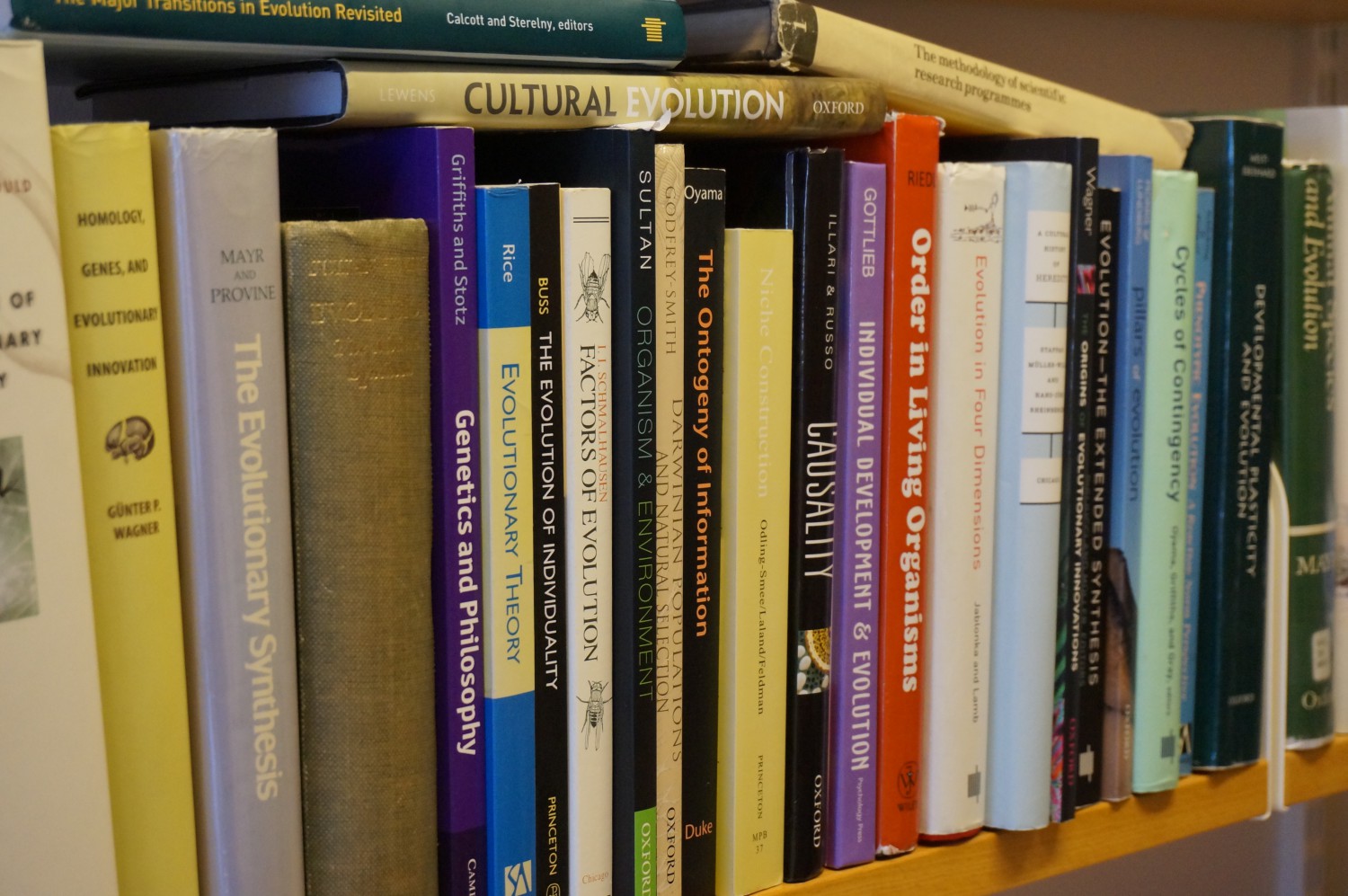 The latter perspective is not new (in fact, it is as old as evolutionary biology itself), but it is gaining popularity through what has become calls for ‘extending’ the evolutionary synthesis. Yet, it is unclear how these perspectives on evolution differs from the gene-centric focus that has been dominant for the last century. To bring clarity to these issues – and perhaps ultimately bring about conceptual change – biologists with different expertise need to work together with philosophers and historians of biology.

Ultimately, conceptual frameworks should be evaluated on the basis of their ability to generate useful research. Much of the work in our group is therefore motivated by putting our ‘work-in-progress’ version view of an extended evolutionary synthesis to the test. This includes a large international effort coordinated by Tobias and Kevin Laland. The initiative, funded by the John Templeton Foundation, include 22 projects and over 50 scientists, philosophers and historians centered at eight institutions, including Lund, St Andrews, Cambridge and Stanford.