The common wall lizard, Podarcis muralis, is a small, diurnal, lizards that is wide spread throughout southern Europe. It has a range of interesting features – including a broad geographic and climatic distribution with many island populations and isolated populations at range margins, extensive genetic and phenotypic divergence between regions, hybrid zones between phenotypically distinct lineages, within-population polymorphism and an interesting reproductive biology. Add to this that is often very abundant, easy to catch, keep and breed, and that it has its genome sequenced, and you understand why it is one of our main study systems.

One of our research themes is on the evolutionary origin and introgressive spread of the suite of sexually selected characters that are found in some parts of Italy. This research combines field and experimental studies of sexual selection with population genetics and developmental biology. 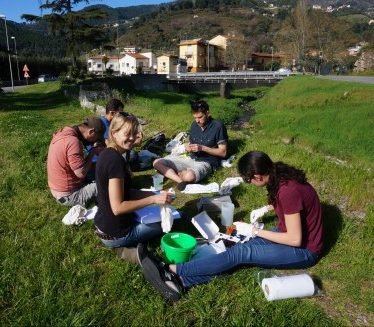 Wall lizards have been introduced into many places where the species is not native, including tens of populations in England. Studying non-native species allow us to study evolutionary processes as they happen. For example, animals introduced from Tuscany or southern France to England will encounter a very different climate to what they are used to (reflect on the choice between holidays on the Riviera or on the ‘English Riviera’). But wall lizards have coped with, and even adapted to, their new environments, partly by speeding up developmental rate.

Our research on wall lizards is a collaborative effort that involves teams from several countries, including Italy, France, Germany, Portugal, Spain and Australia. This helps us to build large data sets, assist each other with particular methods, and help out with logistics during field work. It is an excellent research environment if you wish to develop your own project ideas and make use of wall lizards to answer outstanding problems in evolutionary biology.

BBC visited our lab in 2014 to film a clip about these Mediterranean migrants in the UK, which aired on the One Show: