A new study on water fleas, headed by Reinder and Alex, suggests that a classic example of adaptive maternal effects is not as adaptive as we might have thought.

Some years ago, Tobias, Sinead and Shinichi did a meta-analysis that seemed to undermine the idea that maternal effects are designed to transfer information about the local environment. Reviewers and editors did not really want to hear that, and the paper proved somewhat difficult to publish (but has been well received and cited). But one ‘anticipatory maternal effects’ appeared well supported: water fleas exposed to toxic cyanobacteria produced offspring that were more tolerant to the toxin.

So, to understand how this maternal effect evolves, Reinder and Alex challenged water flea mothers and offspring with cyanobacteria that produce the toxin microcystin. But rather than just expose the animals throughout their lives, they also exposed mothers at different times during her life. The rationale is that maternal effects that have been selected to transmit information are expected to behave like signals – triggered and delivered by a system well designed to pass on information with limited cost to the receiver.

It turned out that offspring indeed were somewhat better able to handle the toxin when their mothers had been exposed late in their lives. In other words, tolerance or resistance can be transmitted to the next generation through non-genetic means. But there was not much to suggest that the mechanism has been selected to transmit information about the presence of cyanobacteria. Instead, our experimental evidence – along with a meta-analysis of Daphnia research – fits better with a model of passive transfer of tolerance rather than an anticipatory maternal effect. Again, reviewers and editors were not very happy to hear this, and this paper also proved somewhat difficult to publish.

We should not be too surprised of these results, however. Not all plastic responses that allow organisms to cope with stress are properly seen as adaptations to cope with the stressor.

Genetically identical sisters, raised in two different environments. Daphnia raised in the microcystin treatment (on the right) displays smaller body size and carries less eggs than her sister from the control treatment

We can think of these maternal effects as – in Mary-Jane West-Eberhard terms – examples of phenotypic accommodation that have not yet been followed by genetic accommodation.

But while our results question if there really has been selection for maternal transfer of information about microcystin exposure, the study is still not quite conclusive. Two kinds of follow-up studies would be particularly informative. 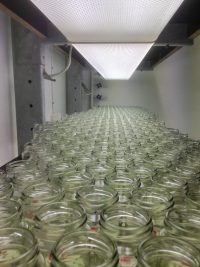 The first is to contrast responses of populations of water fleas with different evolutionary histories of exposure. This kind of comparison can effectively reveal if plastic responses in naïve animals become fine-tuned over evolutionary time (see a nice example from house finches here).

The second is to reveal the mechanism of the maternal effect. This would not only tell us ‘how it works’, but – keeping the comparison with signals in mind – whether or not the mechanism has properties that we expect of systems designed to transmit information.

We have our ideas about what is going on, and Alex has just completed a set of experiments that can tell us more. In the meantime, we hope that this paper will inspire more studies to look at maternal effects as a window into the evolutionary transition from stress-induced responses to local adaptation. To get started, please see here and here.