The World Congress of Herpetology (WCH) is held every four years, and this time it was planned to take place in Hangzhou, China, from August 15-20, 2016. However, unforeseen circumstances related to the G20 summit held in Hangzhou just 2 weeks later forced the organising committee to change plans and move the venue to the small city of Tonglu, 100 km south of Hangzhou. Within only two days on hand, the local organizers nevertheless managed to transfer all 650 participants to Tonglu and arrange a new venue, a truly impressive achievement!

After this slightly bumpy start, the congress was held as scheduled and the participants could get back to science. As expected for a taxonomic meeting, the topics ranged far and afield – from conservation biology to biogeography, systematics, evolution, genomics and ethnoherpetology. The WCH traditionally does not feature much research on developmental biology, despite the fact that amphibians and reptiles have figured very prominently in comparative embryology and developmental mechanics during the first half of the 20th century. Therefore, Tobias and Nathalie decided to organise a symposium entitled ‘Ontogeny Creates Phylogeny – How Can a Developmental Approach Contribute to Herpetology?’. 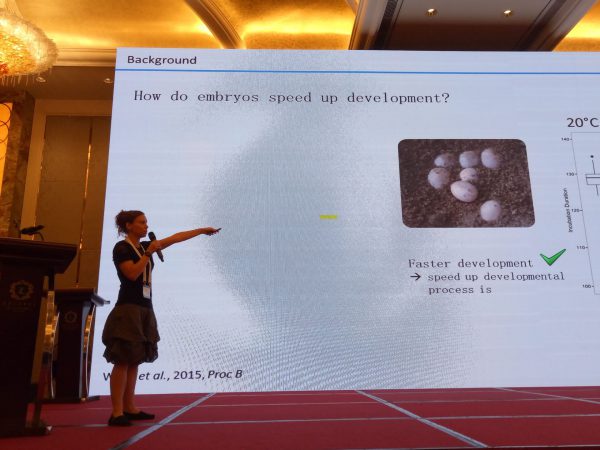 he symposium was held in the ‘Grand Imperial Ball Room’, the main hall of the venue. Despite that participants could choose from six parallel sessions, our symposium drew a large crowd. The speakers of the symposium had the opportunity (or challenge) to present their research to a broad audience that is not specialized in developmental biology. Amongst a great line-up of speakers, including Prof. Jim Hanken and Prof. Mike Richardson, Nathalie presented our developmental genetics work showing how wall lizards have adapted to low incubation temperatures in England. 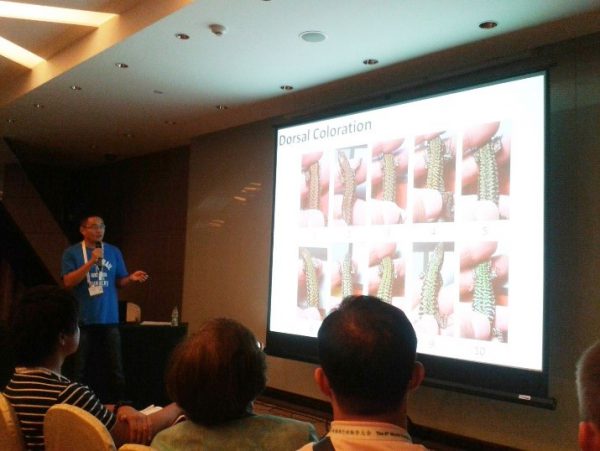 One of the most popular symposia was the one on hybrid zones organised by Ben Wielstra & Evan McCartney‐Melstad. Here, Yang gave the audience a flavour of the genomics of the sexually selected introgression between French and Italian wall lizards. This symposium nicely demonstrated that genomic analyses of hybridization have become a hugely prolific research area. High numbers of samples can be sequenced, which allows a detailed reconstruction of historical processes and testing hypothesis about what drives genetic exchange.

All in all, the WCH was scientifically and culturally (for Nathalie, not so much for Yang) a very interesting experience and a nice way of getting to know the herp communities around the world. Maybe the Uller group will have even more to deliver at the next WCH held in New Zealand in 2020!