Are jumping genes driving the radiation of Anolis lizards?

A new study by Nathalie Feiner brings a fresh perspective on the famous adaptive radiation of Anolis lizards. The paper, published this week in the Proceedings of the Royal Society of London B, reveals that speciation events are accompanied by accumulation of DNA sequences that can copy and paste themselves within the genome. Such transposable elements (TEs), popularly referred to as jumping genes, have long been suspected to contribute to evolutionary diversification. Good evidence for this intriguing idea has been hard to come by, however.

There are two main hypothesis for how TEs can contribute to adaptive radiation. Firstly, TE activity may promote speciation by causing genomic incompatibility between incipient species. Secondly, TEs may facilitate adaptation by rewiring gene regulatory networks such that new variants become available for selection.

To test these hypotheses, Nathalie compared the DNA sequences of Hox gene clusters of thirty lizard species. The results revealed that there was a burst of TE activity in the lineage leading to extant Anolis. It did not stop there – TEs have continued to accumulate during speciation events, leading to the pattern that Anolis lizards whose evolutionary history is characterized by many speciation events also accumulated many TEs. This finding nicely supports the hypothesis that TE proliferation may contribute to reproductive isolation. 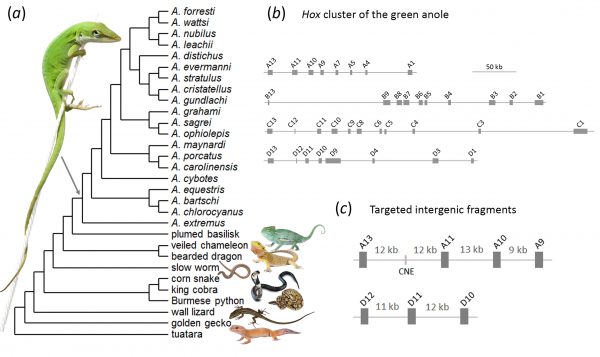 Could TE activity also have caused the morphological differences that characterize Anolis ecotypes? Well, there is no evidence for this as yet, but this hypothesis is much more difficult to test since we need to learn more about developmental genetics to know where to look. Nevertheless, Nathalie’s study is an exciting first step towards unravelling the genomics of adaptive radiation of these wonderful lizards!