As the EU-funded project IDEAL came to a close, Tobias and Bas Heijmans looked for a good scientific reason to stay in touch. Tobias’ plans to work on water fleas seemed like a promising way to collaborate. The only problem was that the project was not funded, but a Wallenberg Academy Fellowship soon made it possible to get going.

Thanks to Reinder Radersma, Elmar Tobi and Amanda Raine we got the methods working, designed an experiment and collected data. Our aim was modest: we simply wanted to test if – and to what extent – environmentally induced DNA methylation really was heritable in Daphnia. If it was, lots of interesting things could be done. If it wasn’t, we would not need to worry about missed opportunities to learn something new. Either way, we’d all learn new stuff and have fun.

As it happens, various things slowed us down. Reinder and PhD student Alex pushed on with other experiments, which suggested that – at least as far as adaptation to toxic cyanobacteria goes – the importance of non-genetic inheritance may have been exaggerated. All of us were busy with other projects and, to be honest, the lizards were just so much fun. The DNA methylation project entered a dauer stage – inactive, motionless, yet alive.

It could have stayed that way were it not for a grant from SciLifeLab (thanks!), and Nathalie took up the challenge as Reinder began his new job. Together with Louella, Markus and Björn, Nathalie demonstrated that our ideas were not so off the mark after all – environmentally induced DNA methylation really seemed to be inherited in water fleas. 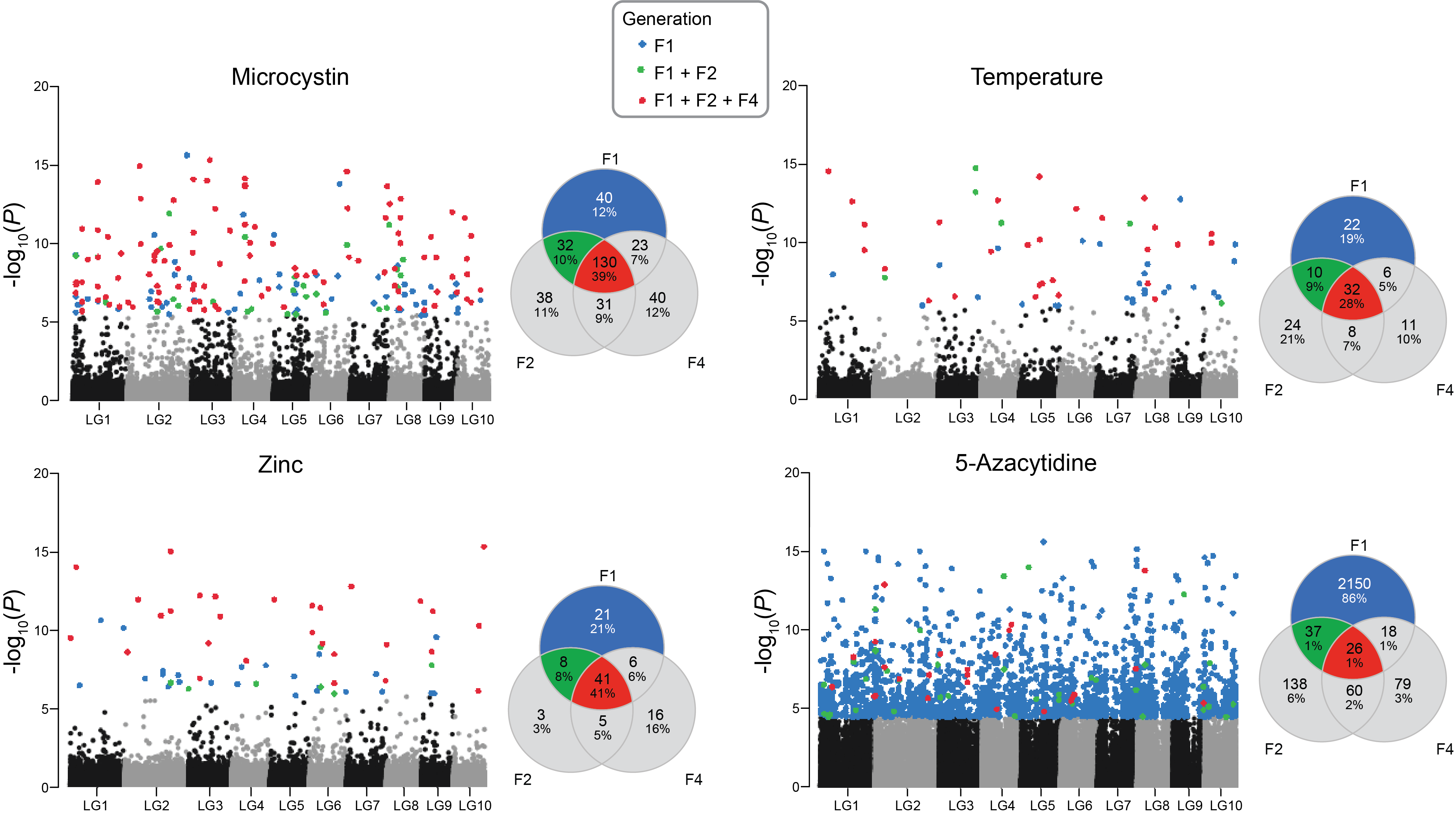 Overlap between differentially methylated positions (DMPs) between the three generations in all four stressors.

Exposing mothers to one of three natural stressors – high temperature, zinc or cyanobacteria – induced a similar number of differentially methylated CpGs (DMPs) in their offspring. These DMPs were not randomly distributed across the genome, but almost exclusively found in gene bodies. Previous work suggests that this is how DNA methylation affects gene expression in invertebrates.

It turned out that about half of the DMPs persisted into the F4 generation. We were surprised at this high proportion, but the results were robust to our attempts to explain them away.

Since we had included a treatment with a de-methylating drug, we could also show that Daphnia in fact has a reliably machinery to re-methylate the genome. Thus, the environmentally induced DMPs to a very large extent escapes the ‘normal’ re-methylation. 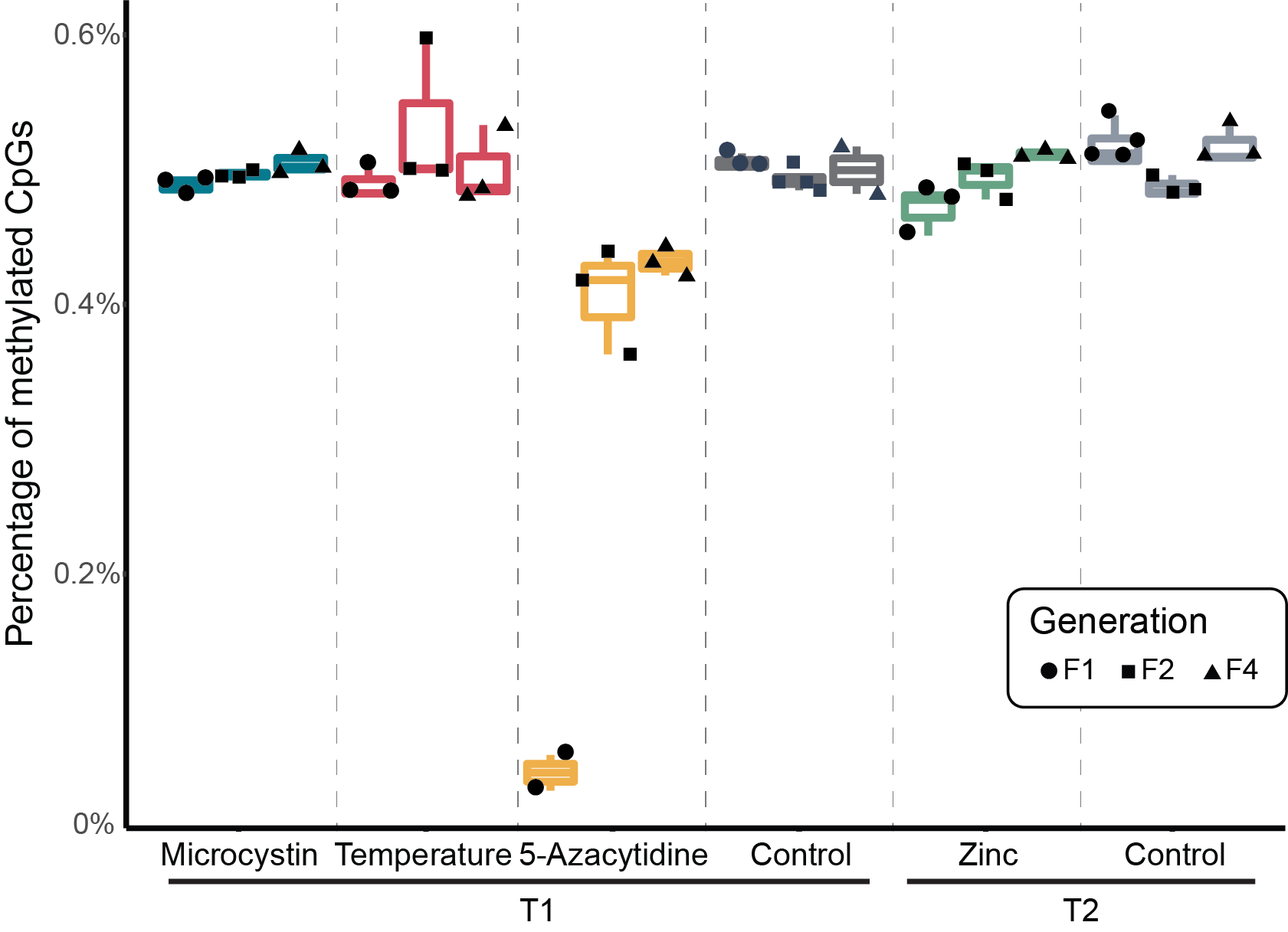 It is tempting to interpret these results as evidence that inheritance of DMPs has a biological function rather than being a system failure. Whether or not that is the case, the environmentally induced DMPs can certainly have biological consequences since they were enriched in genes with particular functions – functions that were specific to the stressors.

Looking back, it may seem discouraging that it took ten years from idea to paper for a ‘simple’ proof-of-principle study. Well, sometimes it is just like that – ideas are cheap, putting them into practice is what’s hard. But now we know that it is worthwhile to study the ecological and evolutionary consequences of epigenetic inheritance in water fleas. New molecular biology methods and field experimental set-ups make this a pretty exciting project.

You can read the paper published in iScience here.