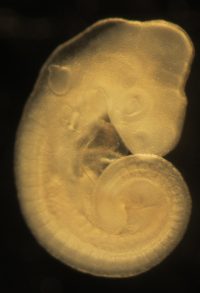 Populations adapting independently to the same environment provide important insights into the repeatability of evolution. In the 20th century, common wall lizards (Podarcis muralis) from southern and western Europe were introduced to England, north of their native range. We have previously shown that non-native populations of both lineages have adapted to the shorter season and lower egg incubation temperature by increasing the absolute rate of embryonic development.

In this new study, we show that embryos from non-native populations exhibit gene expression profiles consistent with directional selection following introduction. However, different genes are affected in lizards from France and Italy. The biological function of these genes are quite similar, though, and consistent with mechanisms that should speed up development. These results indicate that small populations are able to adapt to new climatic regimes, but the means by which they do so may largely be determined by founder effects and other sources of genetic drift.