Tobias and Nathalie have spent the last three weeks in the field in Australia working on an ARC funded project on the evolution of social complexity in lizards. The project is a collaboration led by Geoff While at the University of Tasmania, which also involves Charlie Cornwallis in Lund and several research groups in Australia. 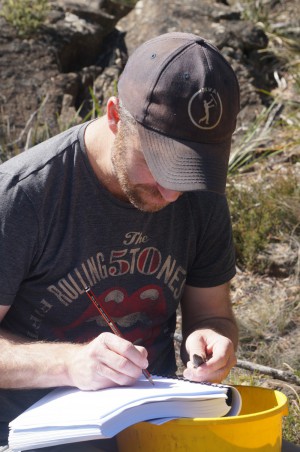 Our aim is to understand early transitions to family life. Most lizards have limited interactions with close kin, but in the Egernia group some species form lasting pair bonds and have offspring that stay at home. In the most extreme cases this leads to multiple overlapping generations and large communities of more or less related individuals that share dwellings, often complex systems of crevices or burrows, which are inherited down generations. This quick guide in Current Biology covers the basics.

A great advantage of Egernia is that we can address the causes of variation in social complexity at three different levels – within populations, among populations, and among species. On this trip we have visited some study sites and species that were new to us. Outside Albury Julia Riley showed us the study site for her PhD project on tree skinks (Egernia striolata), supervised by Martin Whiting and Dan Noble. In the Australian Alps we were given a tour of Guthega skink (Liopholis guthega) sites by Zak Atkins. Guthega skinks are only found in a few high elevation (>1600 m) sites. Zak’s project, which is supervised by Kylie Robert in collaboration with David Chapple, provides important data for comparative analyses of the causes of social complexity in Egernia. He is also revealing some very interesting aspects of the species’ thermal biology, among other things.

The last two weeks were spent lecturing at the University of Tasmania and field working in the eastern and south-western parts of the state. It is on Tasmania we find the main study species, White’s skink (Liopholis whitii). We – or rather Geoff and his students – make use of field, enclosure, and laboratory experiments to understand the evolutionary causes and consequences of social complexity. Although it was too hot for skinks at times, we caught a lot of lizards and had many good nature experiences, including close encounters with penguins.