Good News!! Tobias Uller and Kevin Laland have received a £5.7 million grant from the John Templeton Foundation. The project brings together an international multi-disciplinary team of 50 world-renowned experts centered at eight institutions. The aim is to study evolution with alternative perspectives on the relationships between genes, organism, and environment. Tobias is the Project Co-Leader, making Lund University one of the main beneficiaries and a centre for the initiative.

What are these alternative perspectives that people talk about? Well, the brief answer is that – in contrast to how biologists typically think about biological causation – the genome does not have privileged control over development and heredity. Instead, the organism plays active, constructive roles in its own development as well as that of its descendants. Once biological causation is viewed this way, it becomes apparent that developmental bias, plasticity, niche construction and so on gives a directionality to evolution that is not very well accounted for by natural selection of genetic variation alone (you can read the details about what has become known as the ‘extended evolutionary synthesis’ here in the 2015 Darwin Review in Proc R Soc Lond B).

“The extended evolutionary synthesis does not replace traditional thinking, but rather can be deployed alongside it to stimulate research within evolutionary biology. The new perspective retains the fundaments of evolutionary theory – genes and natural selection remain central, for instance – but there are differences in how causation in biology is understood. As a result, some of the burden of explanation for adaptation and the diversity of life forms falls on the constructive processes of development” (for more, see this interview with Kevin on This View of Life).

The grant is one of the largest to ever be awarded to evolutionary research and funds 22 inter-linked projects under four umbrella themes. It also supports a wide range of additional activities that will promote interaction and collaboration between institutions in Sweden, Great Britain, and the USA.  Institutional contributions to salaries and studentships amount to a further £2.0 million that support the research and the education and training of doctoral students.

A unique feature of the research programme is that the scientists team up with leading philosophers of science to advance our understanding of evolution.

“The central involvement of philosophers of science will bring increased awareness among biologists of how conceptual frameworks shape their own research. This will leave us better equipped to overcome communication barriers and differences in perspective, and ultimately facilitate scientific progress” says Dr Uller. 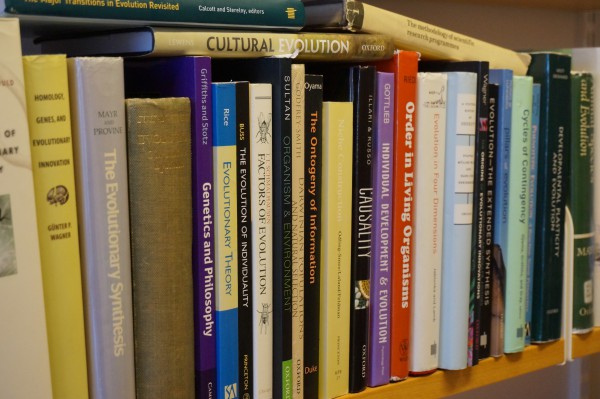 The guiding principles for the 22 projects have therefore been to identify conceptual differences between traditional and alternative interpretations of the evolutionary process, develop theory that fills the gaps in contemporary understanding, and to devise key projects that provide critical tests of points of contention.

“New views on development and heredity require new models of evolution” says Stanford University theoretical biologist Professor Marcus Feldman, a Member of the US National Academy of Science, whose projects focus on the evolutionary implications of non-genetic inheritance.

One innovative approach is to make use of learning theory to understand how and why biological systems can be so good at evolving, a project headed by Dr Richard Watson at the University of Southampton (work recently featured in New Scientist).

“I am very excited to be part of this initiative, which promises to not only advance our understanding of how evolution works, but also help to better connect evolutionary biology to other disciplines” says Professor Paul Brakefield, a Fellow of the Royal Society of London at the University of Cambridge, another of the participating universities.

The three remaining institutions funded by the John Templeton Foundation are Indiana University, Clark University and the Santa Fe Institute.

Here at Lund University, the project involves Tobias and Nathalie Feiner from the Uller group, Wallenberg Academy Fellow Dr Charlie Cornwallis, Professor Erik Svensson, and Professor Per Lundberg. Lund clearly is a good place to be for those interested in links between development, ecology and evolution. We also hope to inspire biologists to look towards philosophy of science for insights that keep us alert and better able to understand what it is that we are actually doing. Postdoctoral opportunities to join the research program will be advertised soon at feiner-uller-group.se and through the usual channels. If you are interested in our work and would like to come on your own funding please do not hesitate to get in touch.