„A magic dwells in each beginning…“

Indeed, it does feel kind of special to be part of the ‘early developmental stages’ of the Uller group. We are an assembly of six people with very different (scientific) backgrounds and experiences. All of us moved to Lund earlier this year, and it’s therefore a fresh start for all of us in many different ways. Our diverse fields of expertise (from biogeography, life history evolution, and genomics of adaptation to classical embryology) are of course the strength of our group, but it also requires a certain ‘tuning-in’ phase and communication across diverse research areas needs some practice. 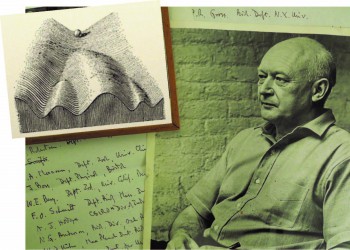 We decided that a reading group would provide us with an informal occasion to get the group going, and to discuss our ideas of how we think evolution actually works. We chose Conrad Hal Waddington’s ‘The Strategy of the Gene’ from 1957 for several reasons. One is that Waddington’s book tries very much the same that we are trying with our research right now, more than 50 years later, namely the synthesis of ecology, development and evolution. By delving into his book, we are aiming to trace back the conceptual origins of our own research agendas. Another reason is Waddington’s focus on epigenetic phenomena. Being very sceptical towards the prevailing neo-Darwinian obsession with assigning absolute control to genes, Waddington was seeking other causal explanations for both development and evolution. It seems like Waddington was sharing very much the same concerns as modern researchers pleading for an extended evolutionary synthesis. Again, this idea is reflected in two of our main lines of research, namely non-genetic inheritance in Daphnia, and phenotypic plasticity in Anolis lizards. Hence, many good reasons to read this book!

The reading group was run as follows: we met up on 4 afternoons to discuss each one chapter of the book. We also had Per Lundberg and Pablo Salmon as honorary guests who contributed interesting viewpoints to the discussion. To get accustomed to Swedish culture, we adopted the local rite of having ‘fika’ (=eating lots of sweets) during the meetings. One person took the lead in outlining the major arguments per chapter, and additional literature was consulted, mostly to get a feeling for how Waddington has been interpreted by the scientific community (see WaddingtonReadingGroup).

In summary, I think we can safely conclude that the reading group was a fruitful exercise and that we can all learn from each other. At least the heavy usage of the blackboard suggests that we exchanged a lot of ideas and thoughts and it was surely a nice way a getting to know each other a little bit better.

I hope this was not the last reading group – suggestions for other books are highly welcome!