Why do lizards smell?

Many male lizards produce secretions that they rub on the ground of their territories. The function of these secretions remains contentious, in particular whether or not they serve as indicators of male fighting ability or suitability as a mate. A new paper, published in Evolution, suggests that sexual selection on chemical composition is, in fact, quite weak. 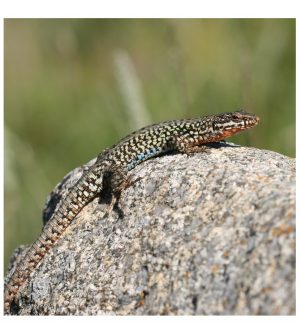 Headed by recent PhD graduate Hannah MacGregor, and in collaboration with Geoff While and Patrizia d’Ettorre, we analysed the chemical composition of secretions from male lizards from France and Italy. The results confirmed previous work showing that chemical profiles can correlate with male secondary sexual characters. However, the correlations were generally weak and inconsistent across the season and between populations. More importantly, there was little evidence that a male’s chemicals make him have more offspring.

That sexual selection on the femoral secretions is weak was further supported by the overall neutral pattern of introgression of chemical profiles in the hybrid zone between the highly sexually selected form (the ‘Tuscan’ lizards) and the ancestral phenotype (details on this hybrid zone can be found here). Nevertheless, three candidate compounds were candidates for asymmetric introgression via direct selection or genetic linkage with visual or behavioural characters.

On the whole, these results are bad news for the hypothesis that chemical communication is sexually selected in wall lizards. Instead, femoral secretions probably function as signature mixtures; that is, they help lizards to keep track of who’s who and to resolve territorial disputes. Yet, every now and then, a particular compound may become consistently selected – perhaps due to genetic linkage – and evolve a more signal-like function. May we speculate that this process can be facilitated by introgressive hybridization?