Sozos Michaelides successfully defended his DPhil thesis on Nov 20th at the University of Oxford. A clean pass without corrections! The external examiner Dr Jason Kolbe from Rhode Island University made the viva both challenging and fun – just like it should be. Celebrations continued well into the Oxford night with many familiar faces from the EGI and the Department of Zoology showing up to celebrate Dr Sozos.

Sozos’ DPhil thesis explores the phylogeography and genetics of colonization in wall lizards. Wall lizards have been introduced into many locations in England and Sozos has used genetic data to establish the origin and reconstruct the introduction pathways of 23 populations. This revealed at least nine independent origins of wall lizards in England and many secondary introductions. Sozos document origin-dependent loss of genetic diversity in non-native populations, which in some instances is accompanied with signs of severe inbreeding depression. The thesis provides a comprehensive study of the genetics of native and non-native wall lizards and opens up for further investigations of the causes and consequences of admixture and the study of local adaptation during range expansion.

Next in line are two short-term postdoctoral positions, first at Oxford/Lund and from January at the University of Tasmania where he will study the phylogeography of Liopholis whitii as part of Geoff’s and Tobias’ ARC grant on evolution of social complexity in these lizards.

All the best of luck, Sozos, and don’t forget your field guide to the reptiles of Australia when you head down under! 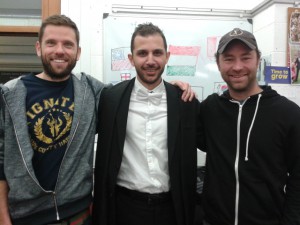 Sozos with Tobias and Geoff